In 2016, I joined a newly created squad within the Flights team. My job, as the sole designer, was to rethink the whole experience, focusing on mobile and paid seats.

As a team we understood that Seat selection was an outdated experience and in need of a major refresh. To gather insights I went through analytics and read past research reports from the checkout workflow. 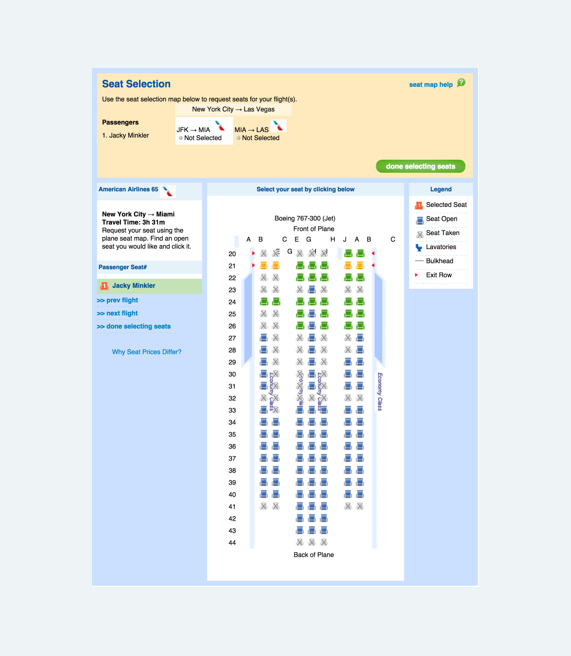 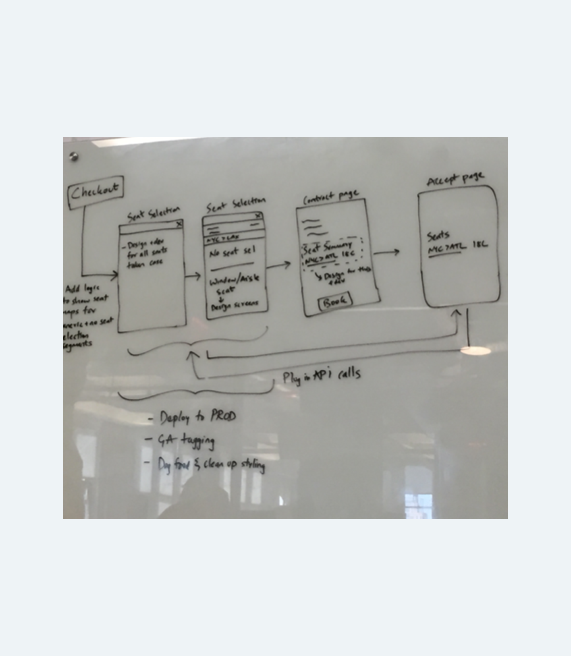 To start off, we needed to set a clear entry point. To do this, we collaborated with the booking team and prioritized the entry point in a new checkout-flow. This joint work and collaboration continued for weeks to coordinate our release plans and find the right transition between checkout and seat selection. 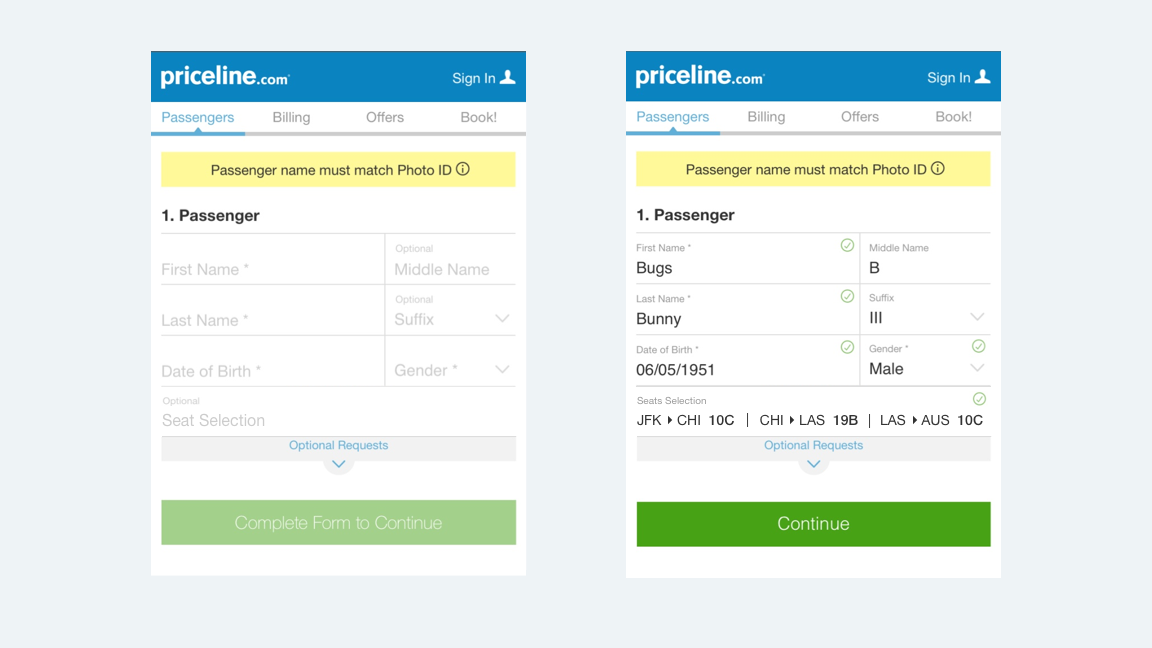 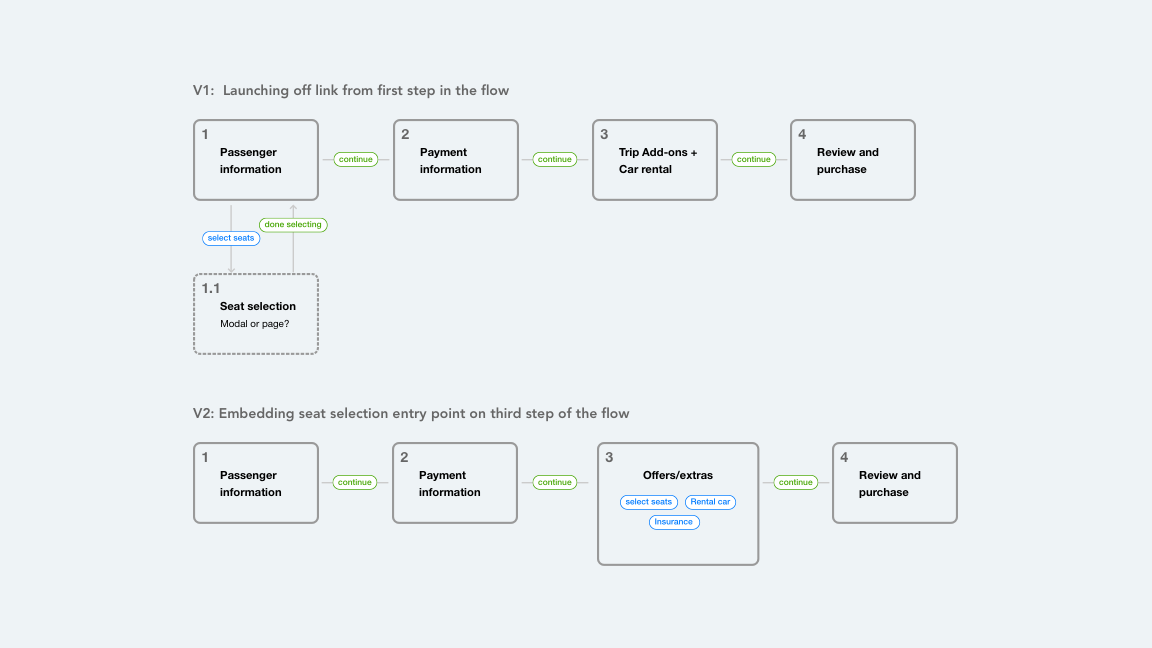 Most flights had a 3-3 (three rows, aisle and three more rows) configuration some a 2-3-2 and in rarer cases we’d get large configurations. Priceline’s market is American, therefore the flights were mostly smaller, local aircrafts.

In this redesign, I prioritized pragmatism and recognition at first glance. I wanted users to look at these configurations and immediately know which seats were available, which they had selected, which were taken, how far they were from exit rows, etc. 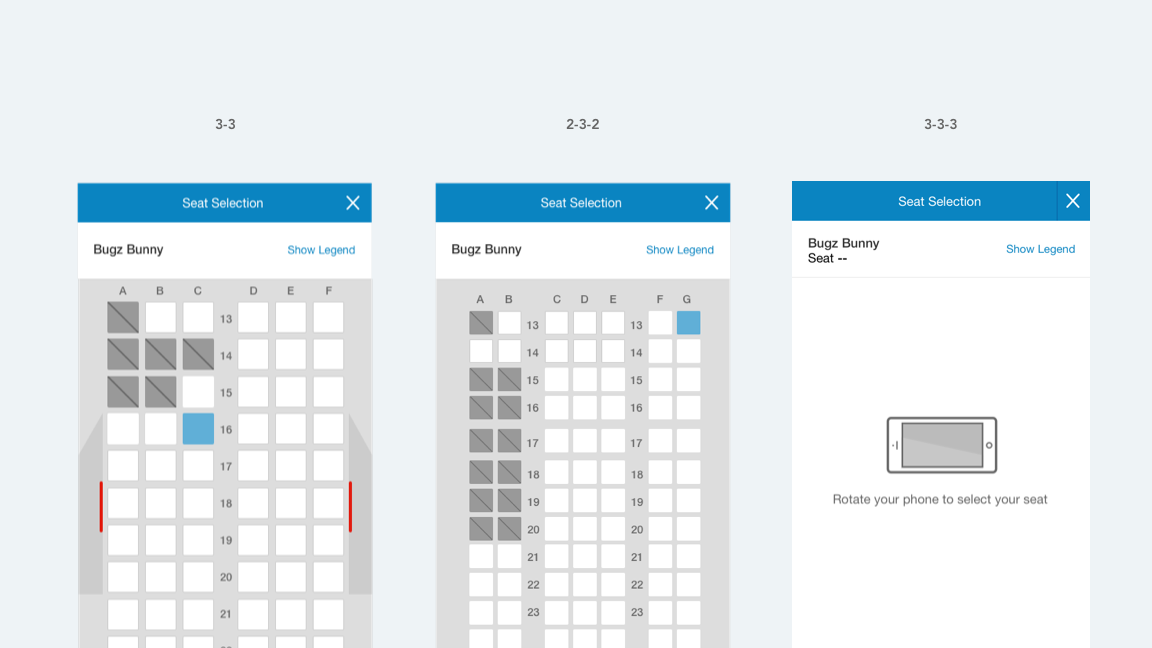 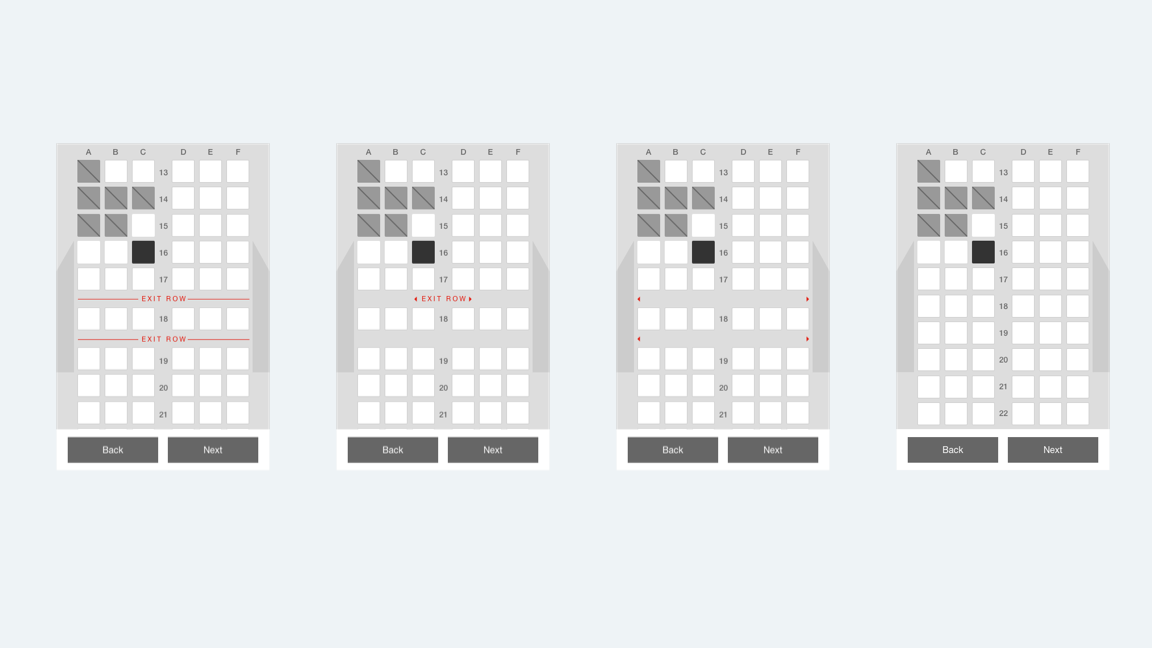 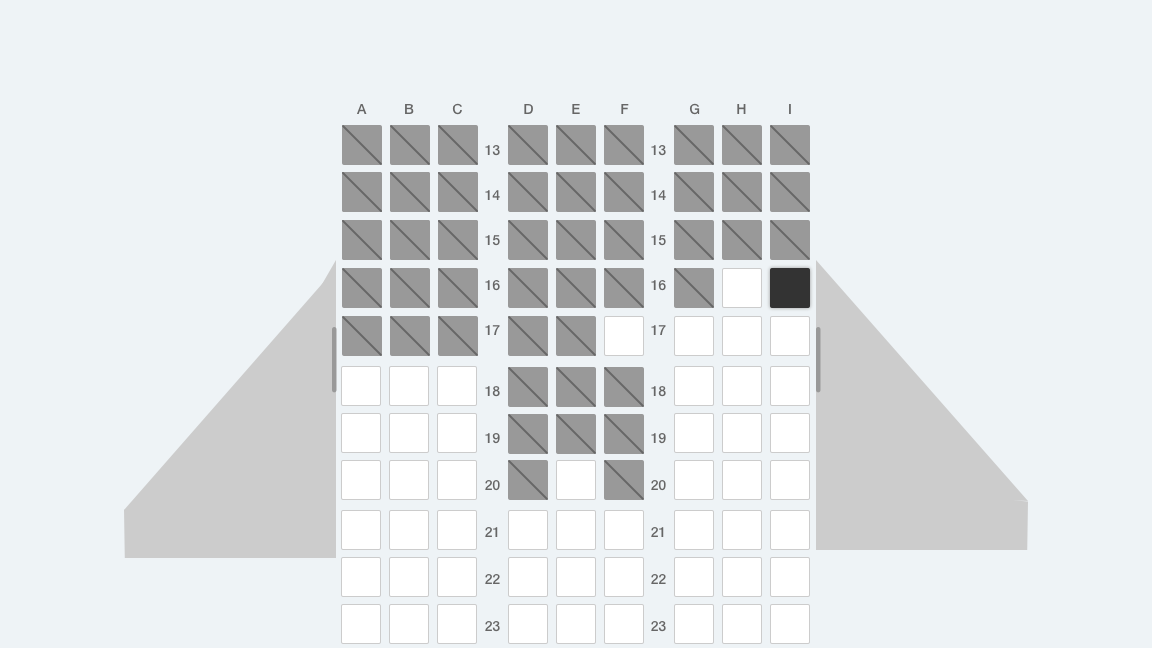 At this time, if seats were too large to fit on a mobile screen, airlines and other OTAs (Online Travel Agencies) would either not allow you to select seats or provide you with some message saying you should try it on Desktop. These “solutions” weren’t good enough for us. We wanted to actually display seats no matter how rare the configuration was. To do this in a simple way, taking into account the rarity of the case, we decided to just ask users to turn their phones in landscape mode to view the seats.

When thinking about the entire experience, the second most important component of it all was a clear navigator/indicator for flights. Users needed to be able to identify which flight they were selecting seats for (something that in the previous experience was difficult to do).

I experimented with different layouts, adding and removing information as well as shapes to indicate which flight leg was active. 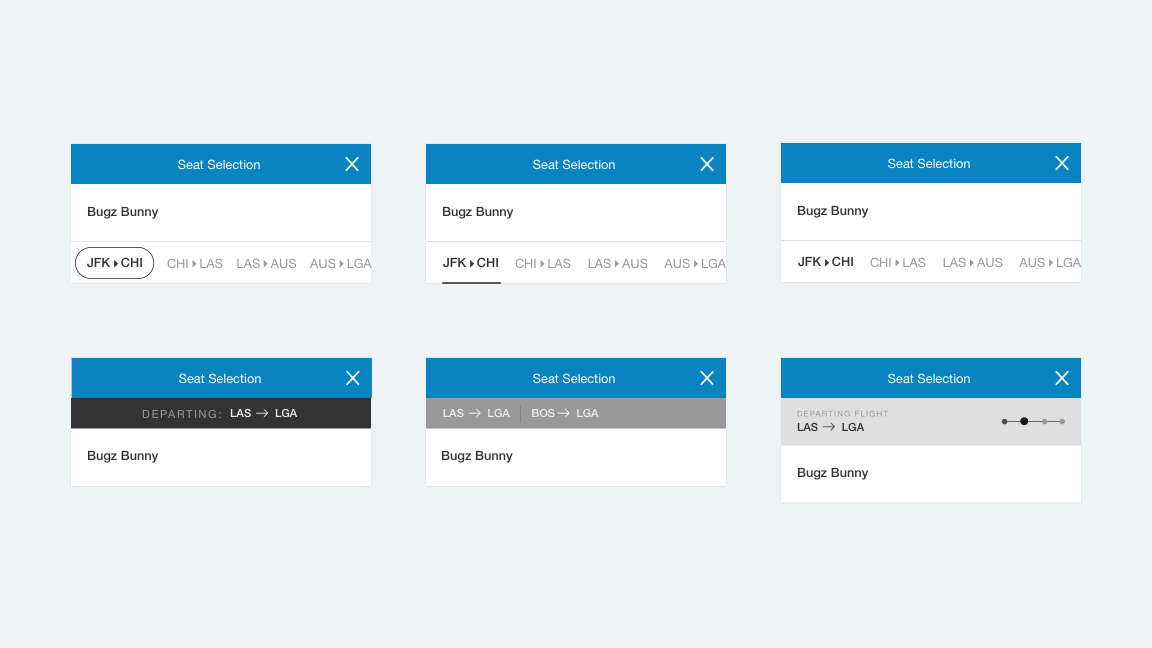 How to sell seats

The main reason why we weren’t selling seats was that we weren’t offering them to users as they were booking flights. We could sell seats post-booking, in a rather round-about way, but even there we had problems with visibility and clarity in our messaging. Users didn’t know what a “preferred seat” was, and its advantage over “main cabin”. We needed more information, so we reached out to some airlines.

During this part of the process, I aimed to introduce as much information about the seats as possible (the size of the seats, how much space you had based on the aircraft, etc.) But we weren’t getting much information. We tried third-party APIs (like seatGuru) but the negotiation process was far too long for our roadmap. We needed to consolidate on static text and we had already compiled some based on the conversations we had with the airlines. 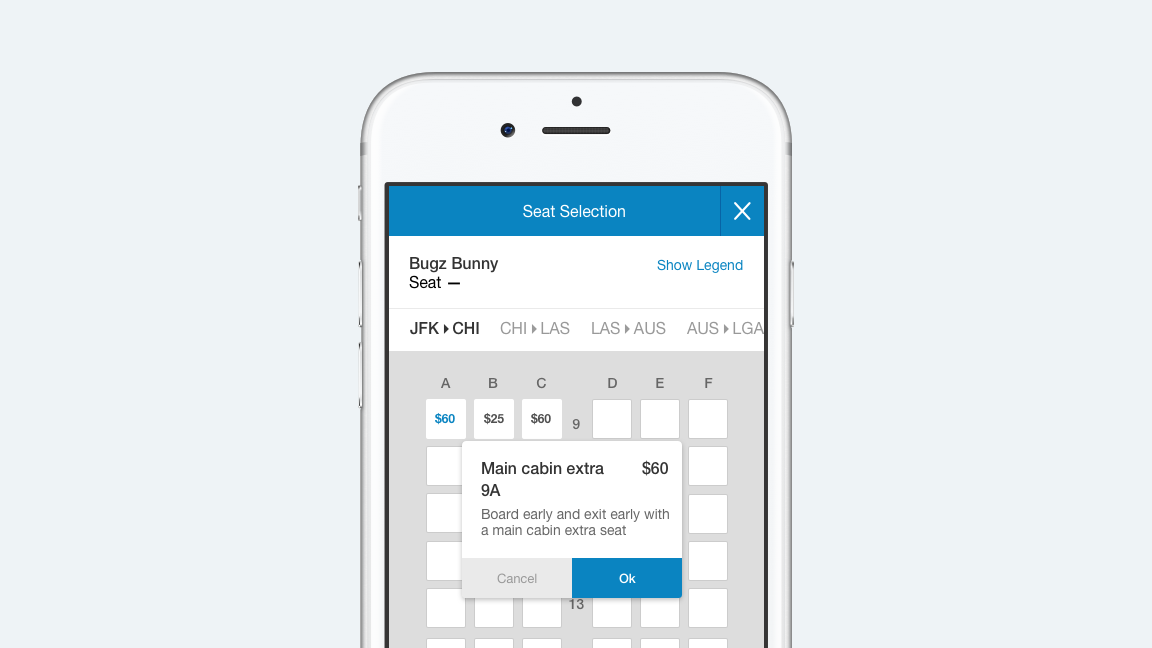 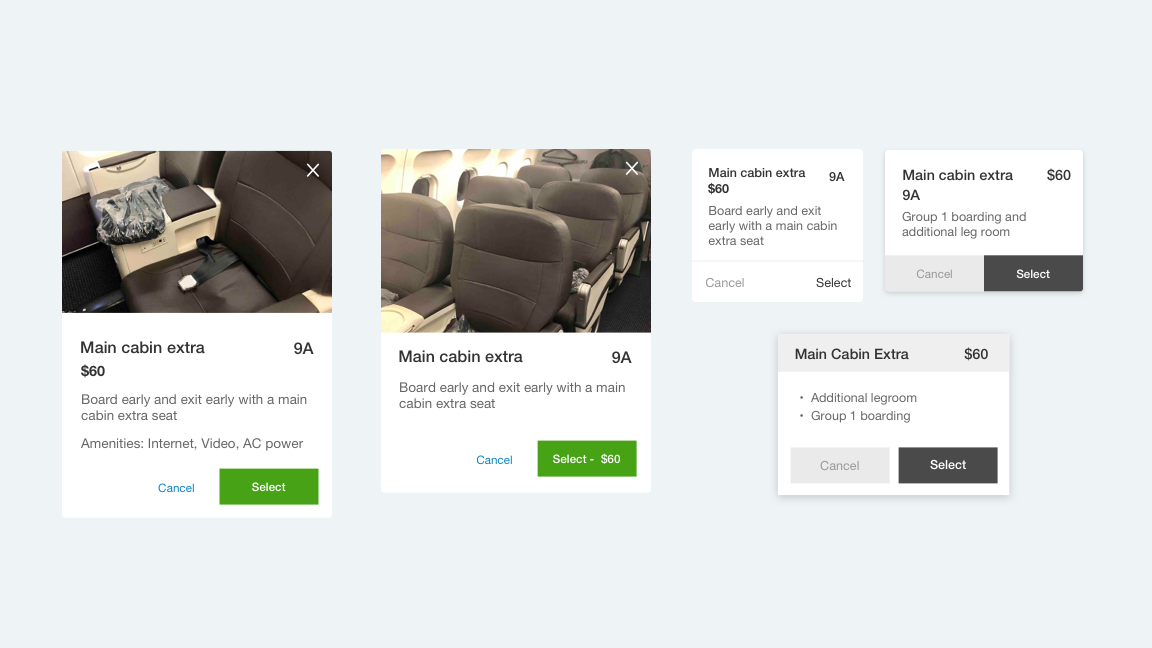 Though straightforward, we needed to do better at messaging what went wrong, and offer solutions if possible.

In 2016, we hadn’t fully defined our illustration style or tone of voice at Priceline. It was all new, I had introduced already a few illustrations on a previous project, now I was dabbling in how we would handle the communication. For this part, I involved our copy writer who we approached for most if not all UX writing needs. 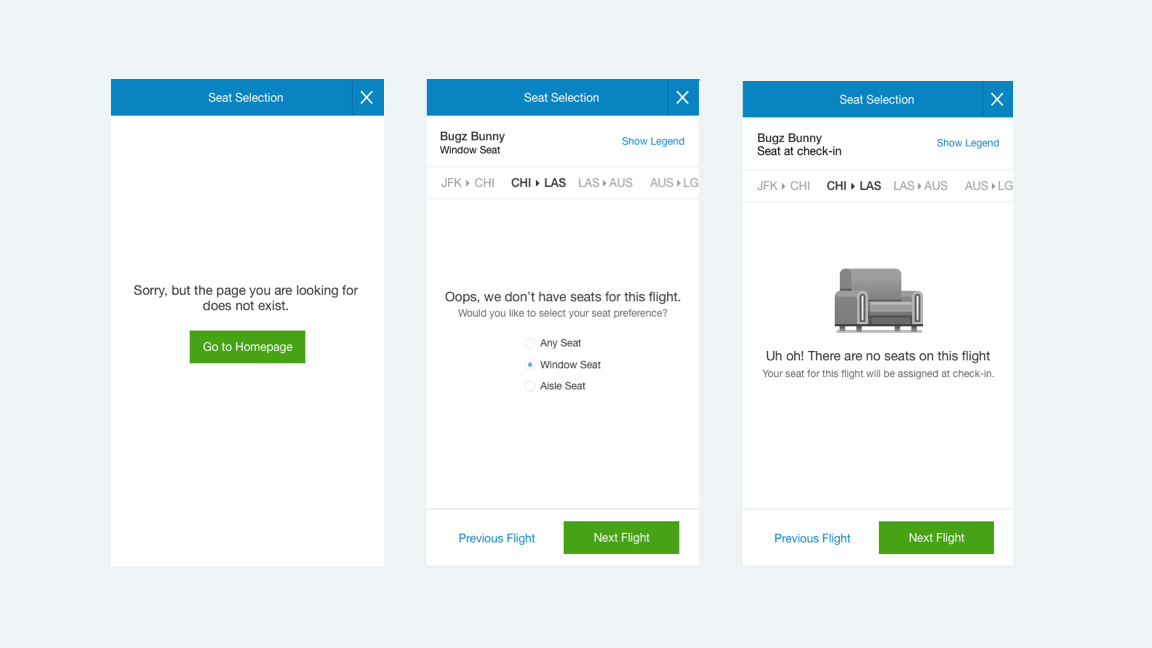 And then we launched

At the time we launched, there weren’t many airlines, not to mention OTAs doing responsive seat selection (or much of anything responsive for that matter). We were perhaps the first to do it this way. We missed paid seats in the release, as it proved challenging to implement in time.

After weeks of Seats being live, we had a higher completion rate and more users arriving to seats. 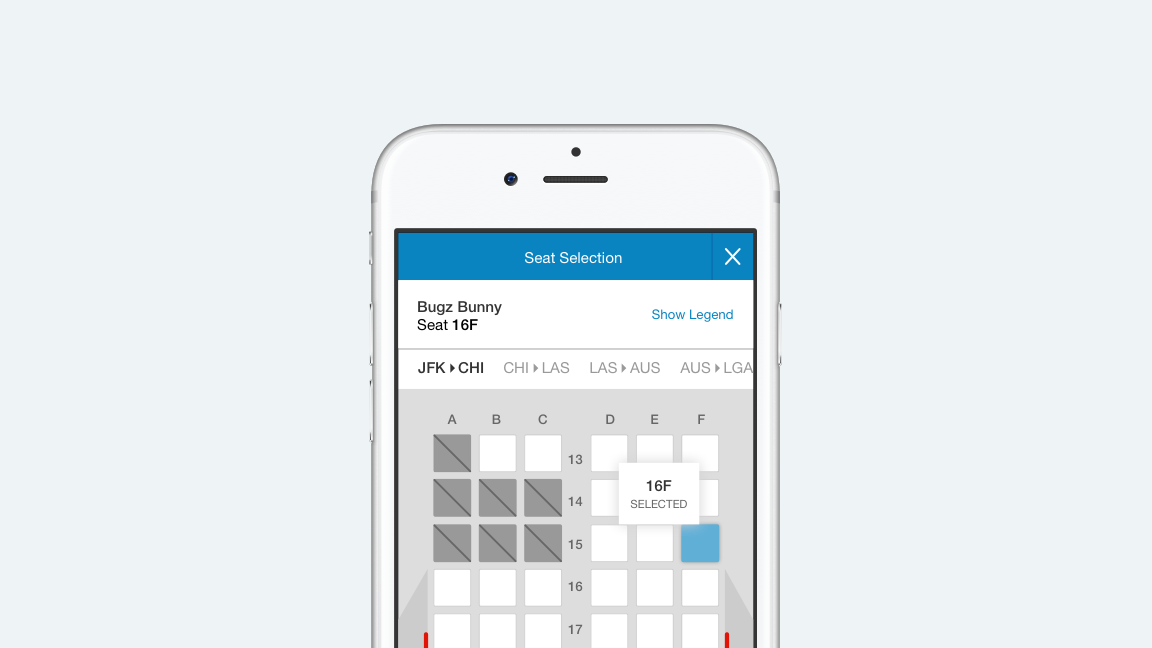 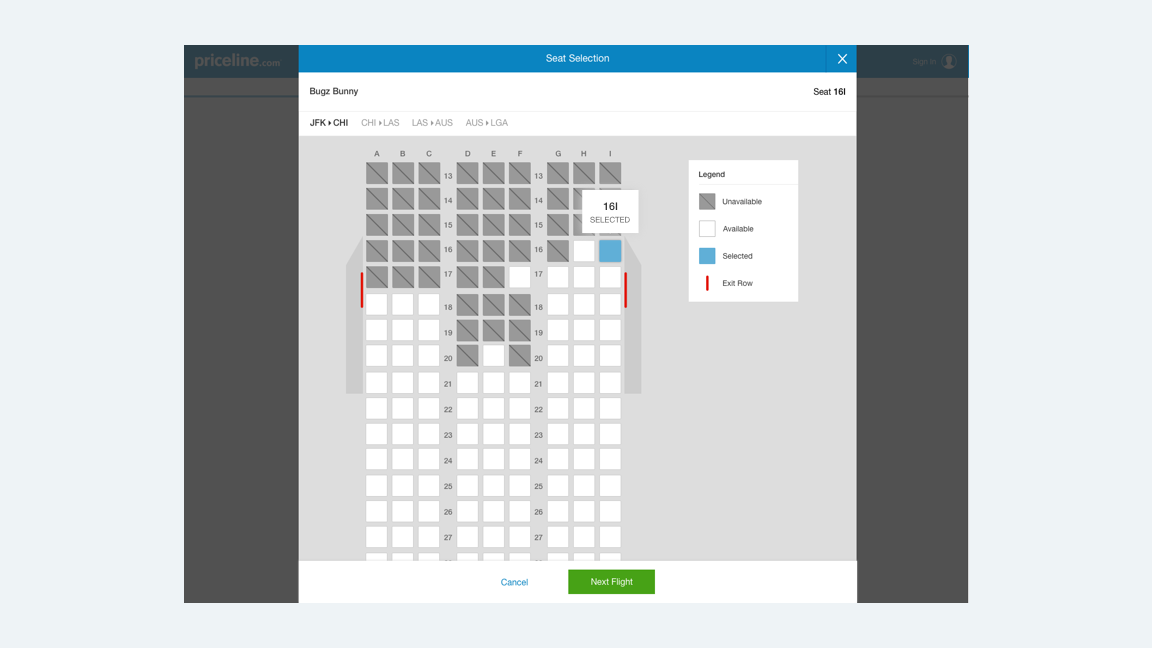 Although most users were buying flights for only one person. Roughly 10% of our users were buying tickets for multiple passengers in one session. During the time we had launched Seats, Virgin America had gone through a major redesign, adding a new seat selection experience comprised of avatars, a versatile seat configuration and much animation.

The implementation of paid seats was taking longer than expected, problems with the back-end and data had made this a much larger effort than we thought. Our team, inspired by what Virgin America had done, and the analytics we had surfaced (in regards to multi-passenger usage) decided to tackle this as the next update to Seats.

We had a flight indicator, which was a modified tab. Now we needed another indicator to show users which passengers they were selecting seats for. At first, I tried to keep the flight indicator intact and added the concepts for passenger selection on top of this. 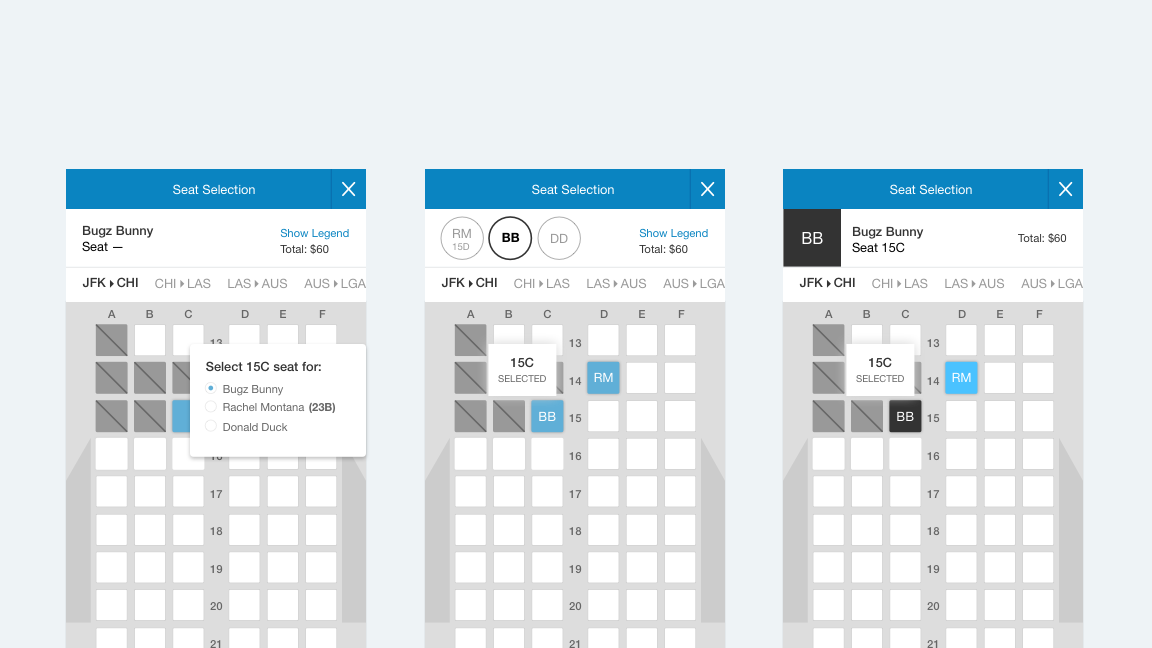 I learned that users understood the airport codes (JFK, LAS, LGA, etc.) when they were purchasing flights they often booked. However, in cases they were flying to new places/destinations, they needed the cities to better understand the layovers in the trip.

I now needed to create a new passenger indicator as well as update the flight indicator to include cities. 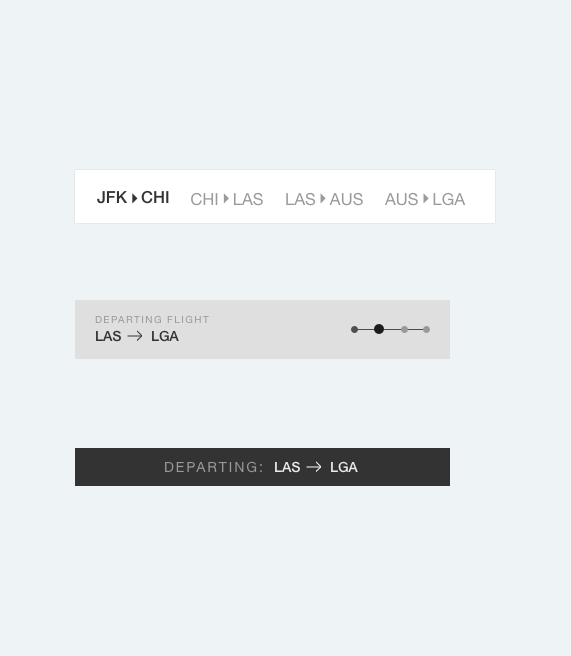 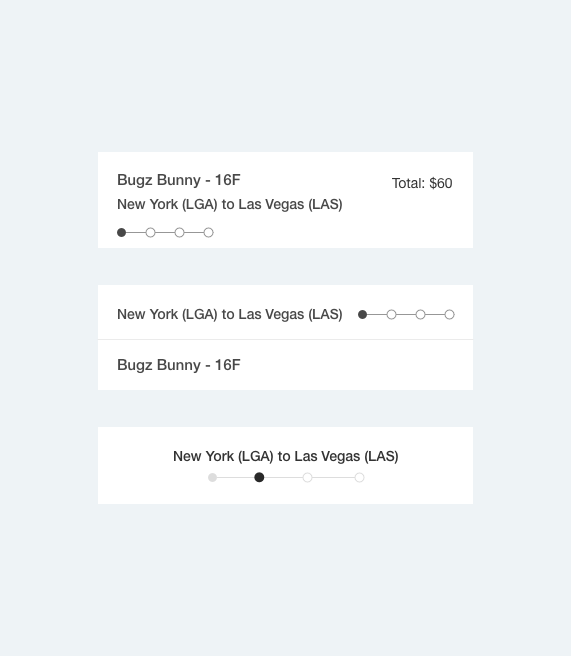 After much sketching and interactions, I began to prototype. I went through several iterations and found something I was happy with. In this process I came up with a passenger indicator, a new flight indicator positioned now at the bottom of the screen, a button that comes up to take the user to the next flight leg and finally a new screen transition for the flight legs.

At the end of 2016, I left Priceline. I was and still am impacted by the work we did on Seat selection. Our team was new, our deadline was tight, and our goals weren’t very clear at first, but we pulled through and came out with huge wins. As a designer, I learned to be more product-focused and technical when prioritizing and presenting my work. I also began to integrate prototyping into my process as a way to ideate and present concepts; this part has been tremendously helpful in my career. 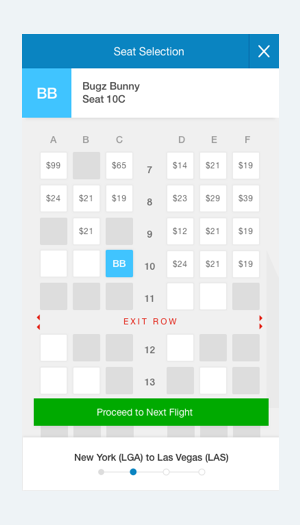 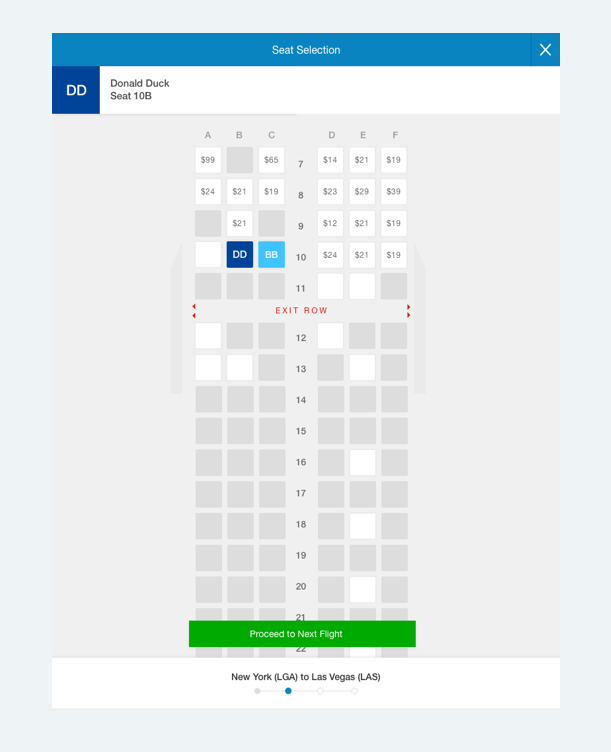 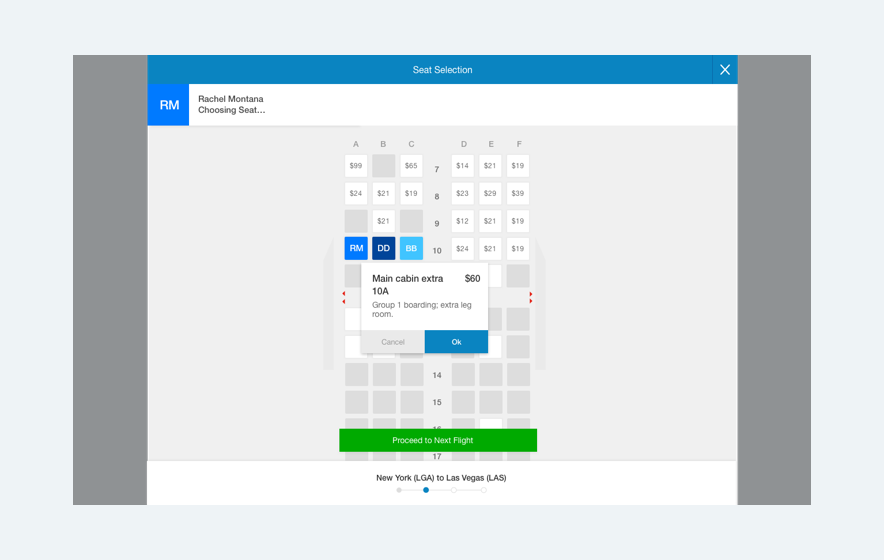