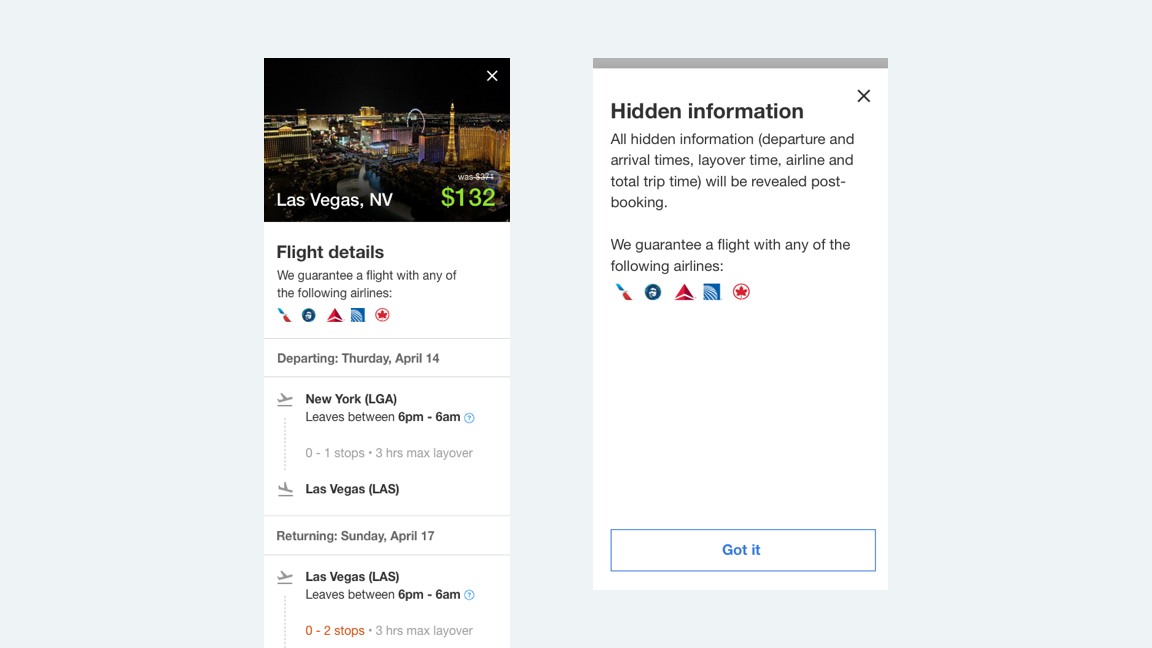 Weeknder was a responsive web app powered by Priceline and its goal was to create a new way to sell affordable weekend flights to flexible, spontaneous travelers.

In 2015, I joined a team of 4 to brainstorm and (if possible) build an interface to test our ideas. The product of our work became Weeknder.

Who are we making this for?

Our target users were young, city people who wanted to get away on the weekend. In essence, us at the time.

In the travel industry, we called these type of travelers: flexible travelers. People who are looking for places to get away on the weekend or for only a few days at a time. Looking at our data, we had confirmed there were people flying last minute, so we reached out to ask a few questions regarding the concept of our product.

Most of the flights were bought for the weekends, hence the name Weeknder.

We had established earlier on that one of the cities with the most flexible travelers (based on Priceline data) was New York City. We had also established, as per some interviews we ran and calls we made, that users would be interested in buying last-minute deals if the place + price were just right. 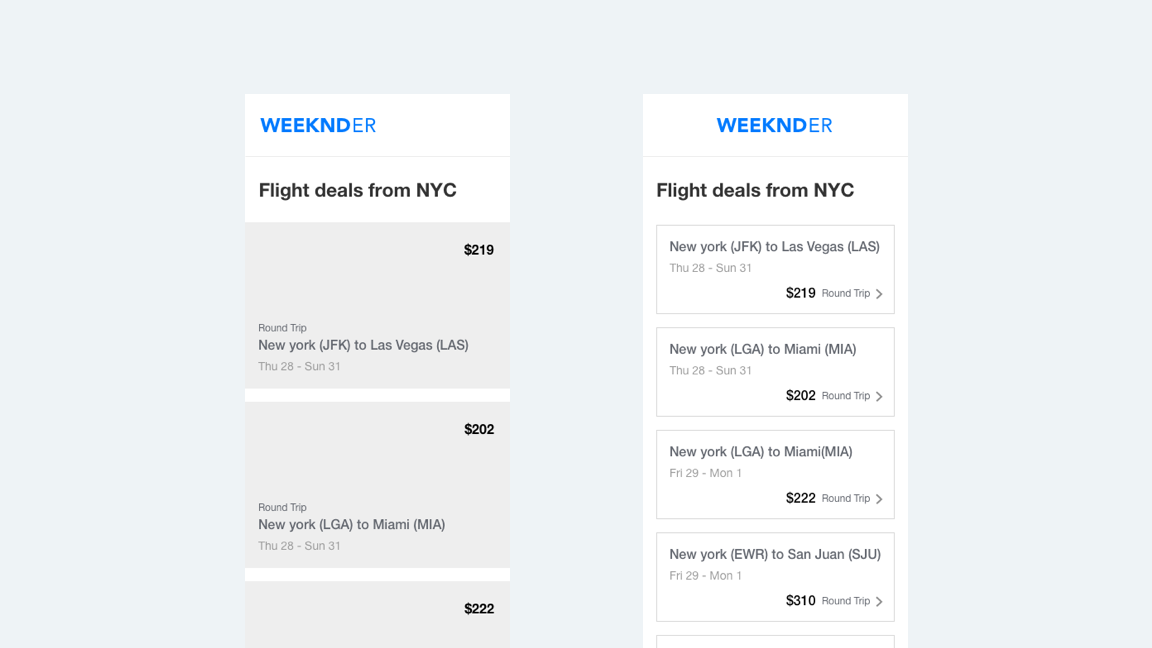 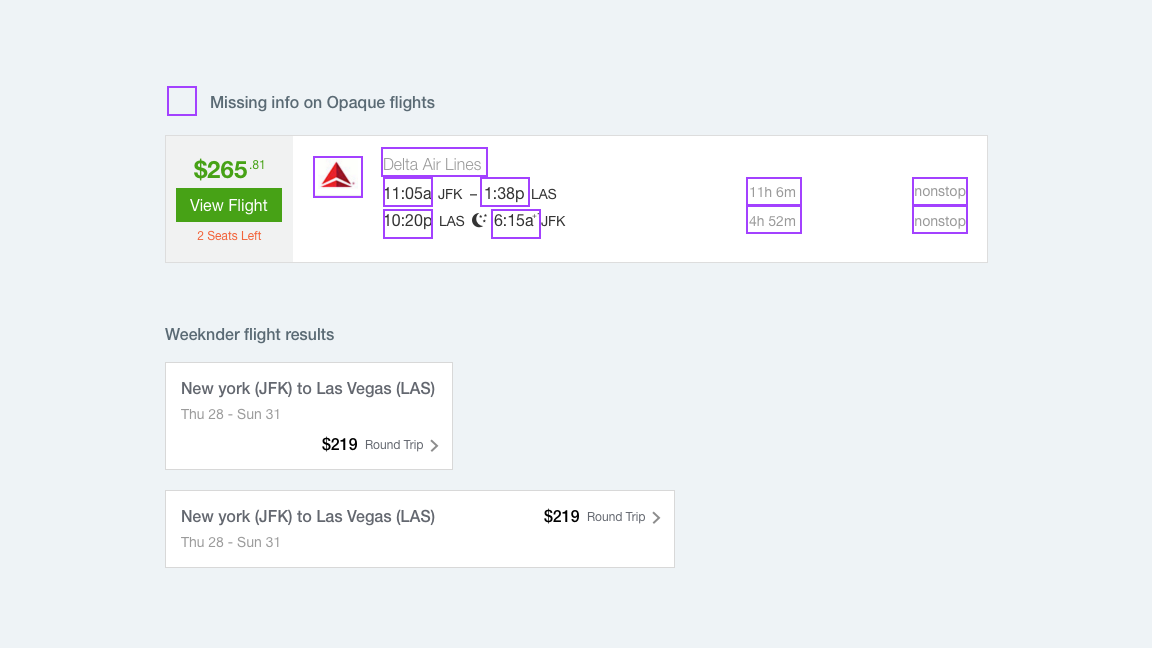 We needed to build a product that would foster exploration. This product would help and inspire users to go to new locations in the United States. As with many ideas at Priceline, we needed to prove the viability of this idea in a quarter. 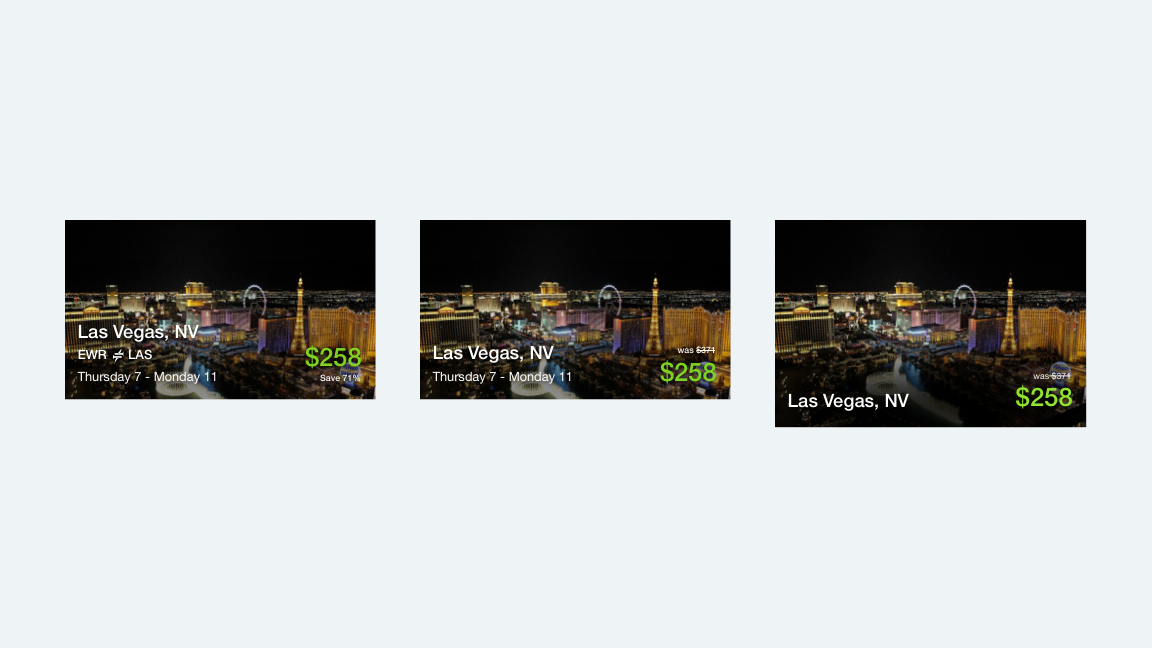 Though initially our plan was to launch without Sorting options, in user testing we found that users were not only interested in the cheapest flights but the ones with most savings. This would end up being the default sorting option. 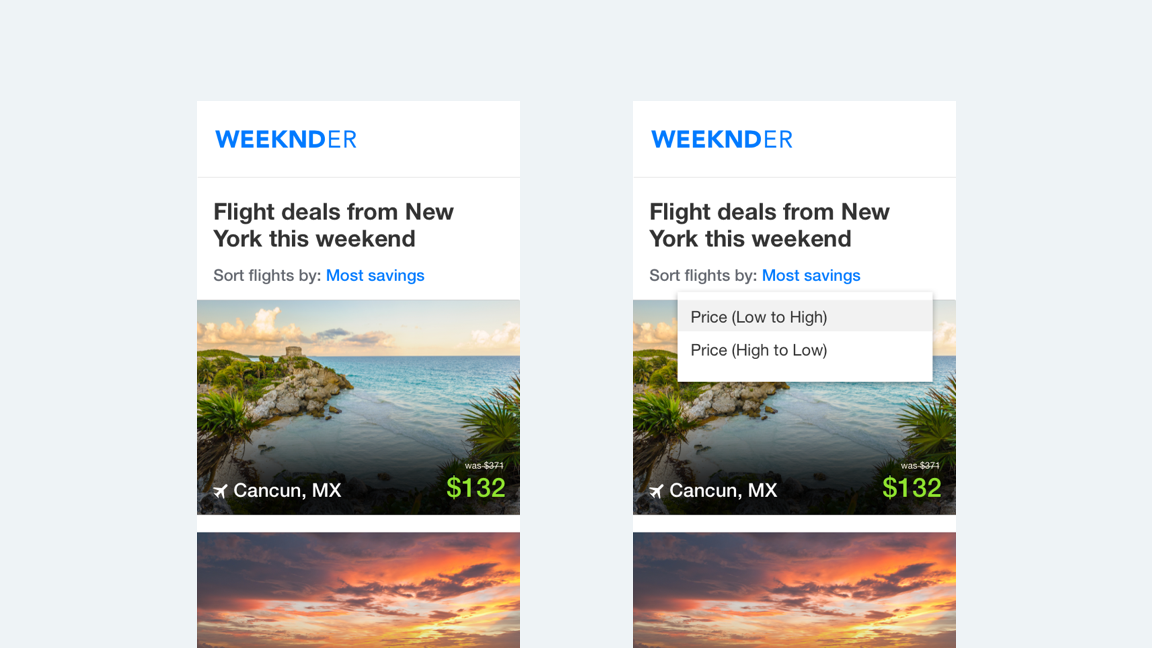 What is flight opacity?

We had an inventory of flight deals, that we called opaque flights. These were used for Express Deals and Name Your Own Price. The caveat with these flights was the hidden information. People didn’t like it, we knew that. But they bought them (for hotels for example) often, if the price was right. We needed to find a way to explain where these flights were coming from and why they were discounted. 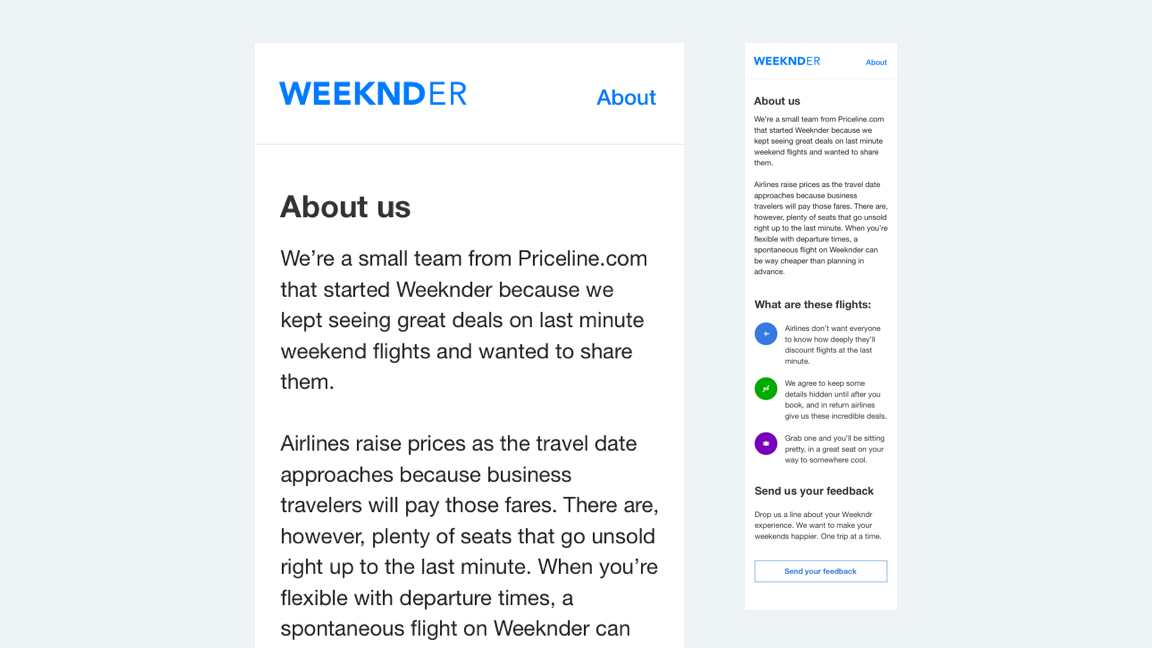 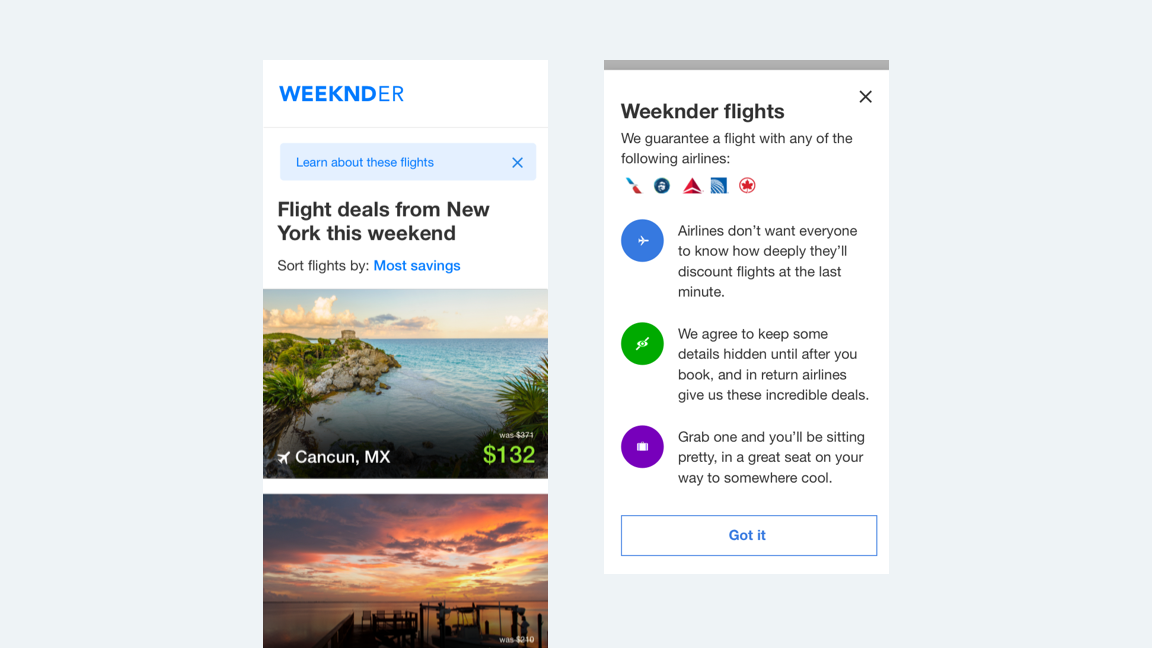 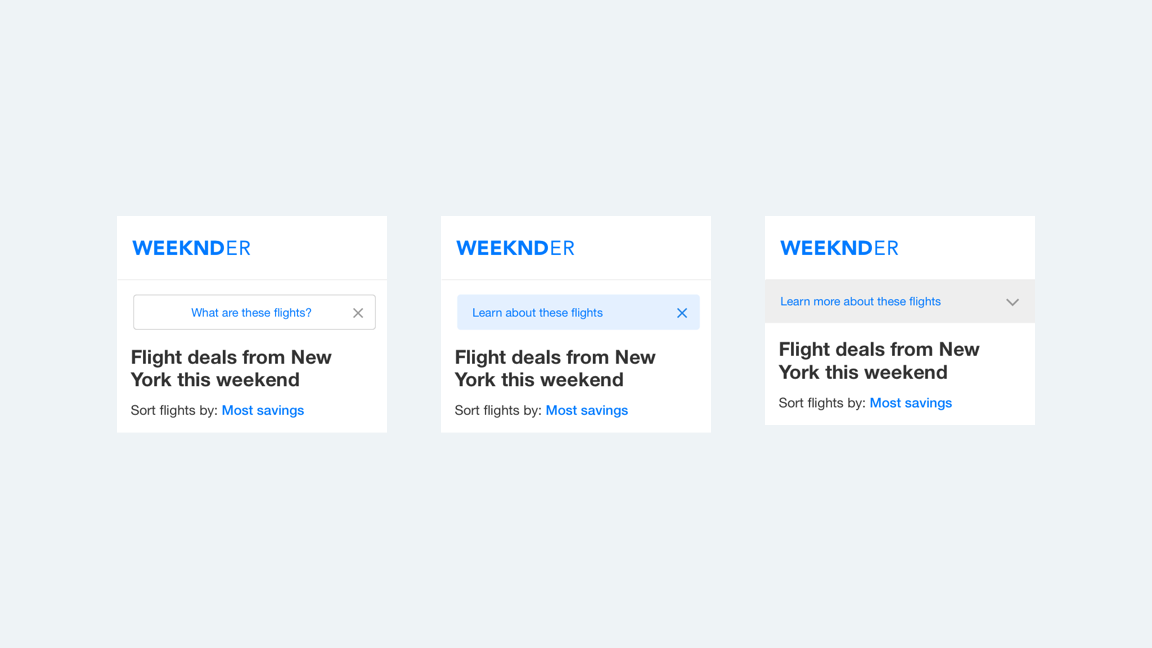 Once the user chose a destination, they needed to see the flight details.

However with much of the details hidden, I had to create a new layout structure for this details. I couldn’t reuse what we had on Priceline, it all had to be rebuilt from scratch. I prioritized clarity in the information hieararchy. I intended to highlight the hidden information at first glance, hence the prominent white space to sepearate the “known details” from the “hidden” ones. 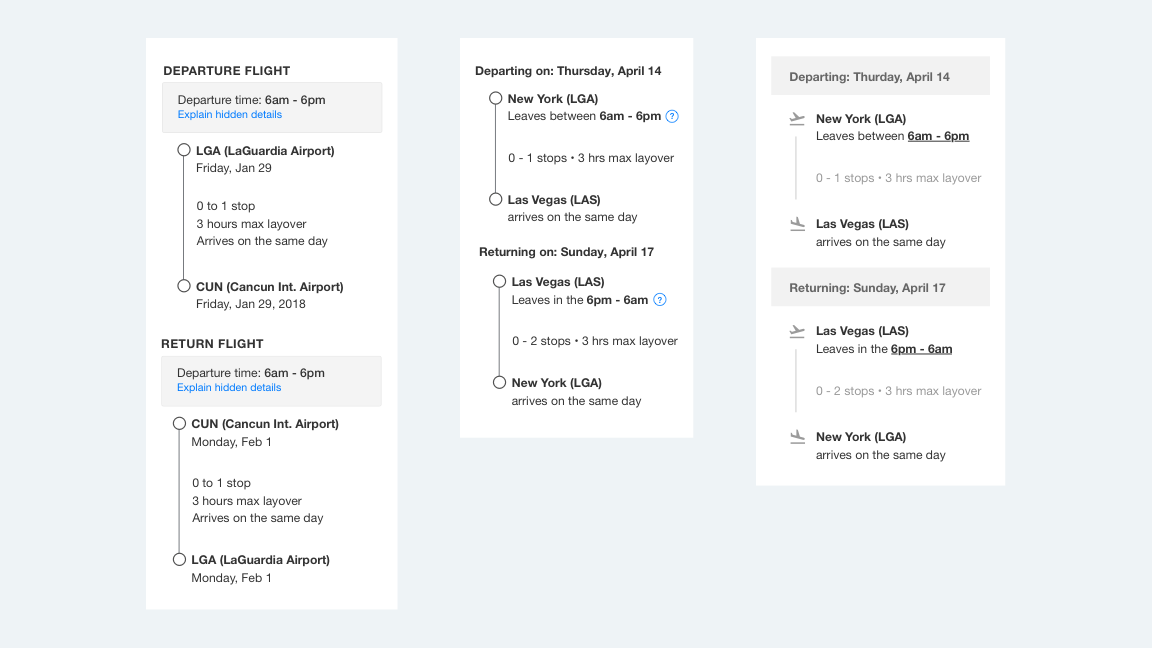 Of course it wasn’t enough to highligh the information, we needed to explain it. A modal explaining the hidden information would display after tapping on the (?) mark on either departing time window.

The handoff to Priceline

In transitioning users to Priceline, we made sure to include details about the flight they selected. Illustrations were non-existent in the Priceline brand at the time. I thought it would add a bit more personality to our product if we used illustrations, so I created one. I explored new colors, shadows, shapes, etc. 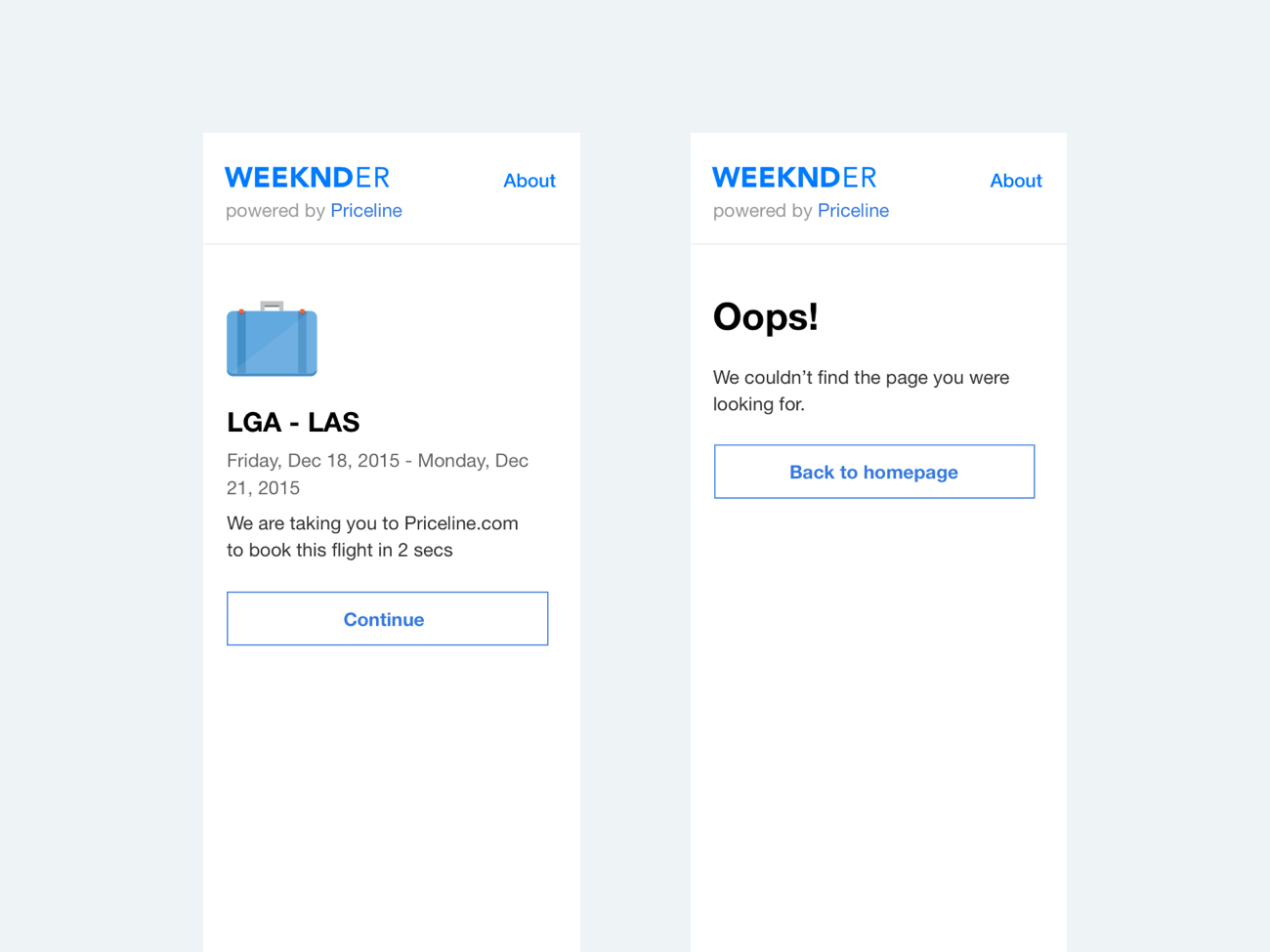 After a quarter of hard work, the first version of Weeknder went live. We ran an organic marketing campaign using Instagram. All of our friends and co-workers posted an image from weekender using the hashtag #weeknder. We also added it to ProductHunt, and some sites ended up writing articles about it.

In the same week we saw our first bookings. 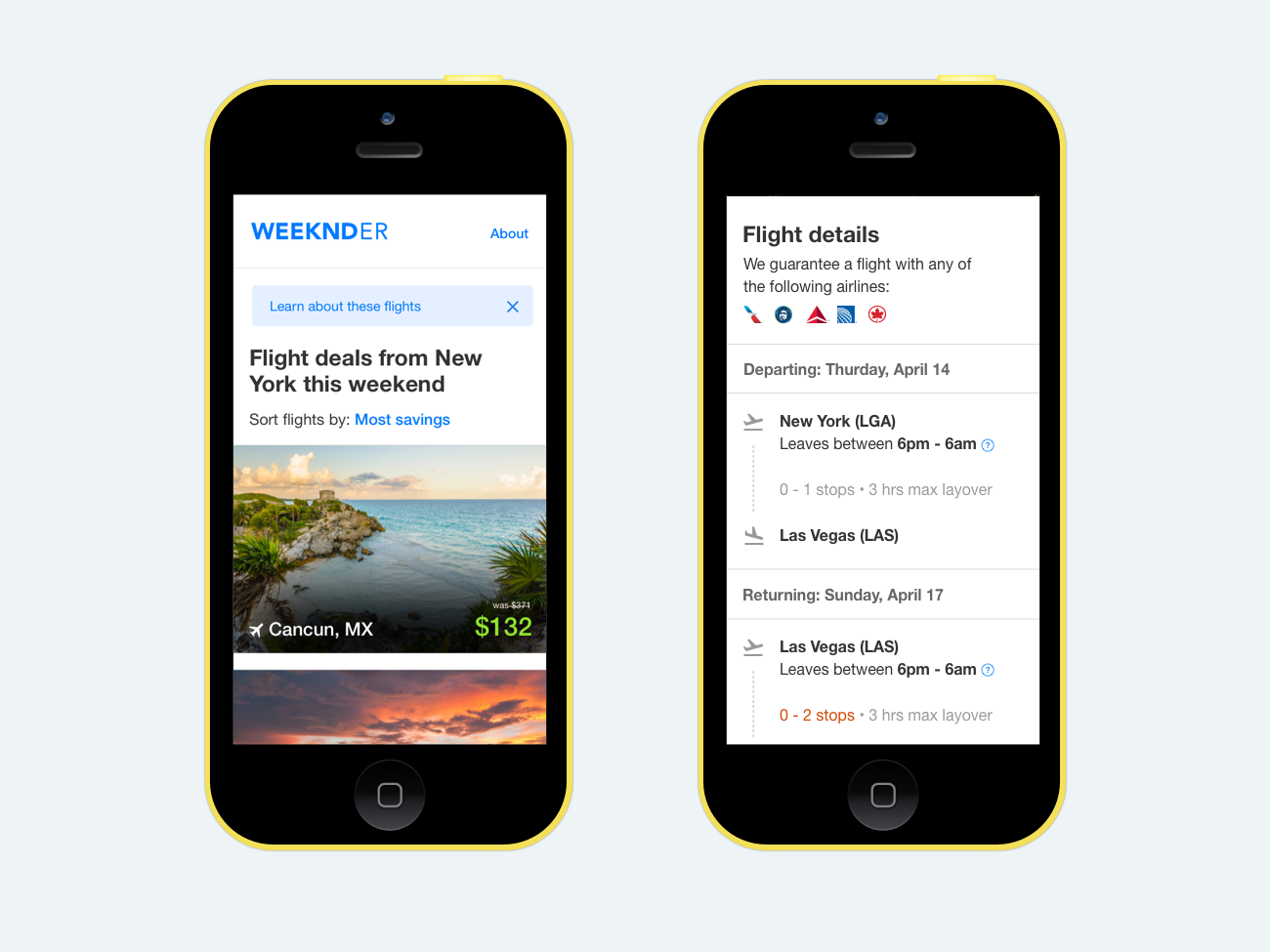 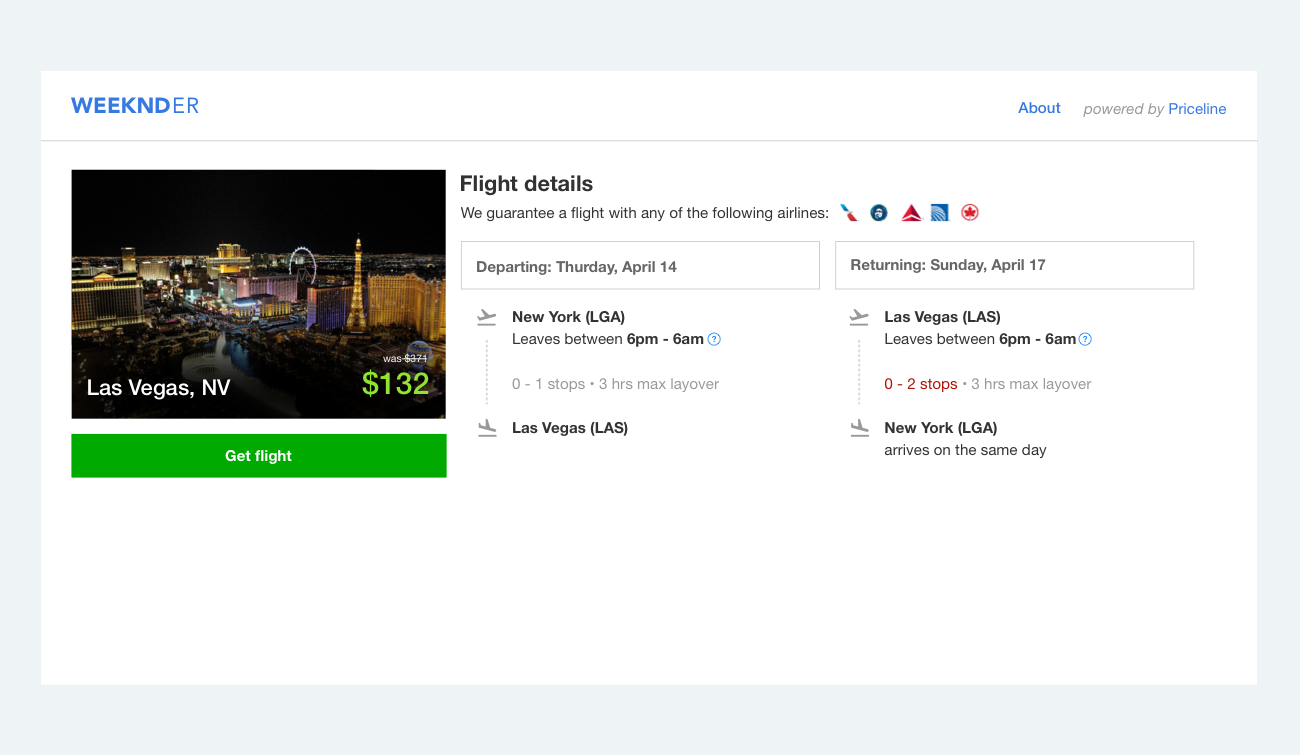 After launch, we received feedback that the time windows were the biggest hurdle users had to commit to our flight deals. Twelve hours, and at times even sixteen hours, was the time window we had been providing so far. We understood the idea of committing to these flights was a tough pill to swallow, so we negotiated with our flight business partners. Fortunately the conversation of shortening these time windows had started months before, so we got lucky in our timing. 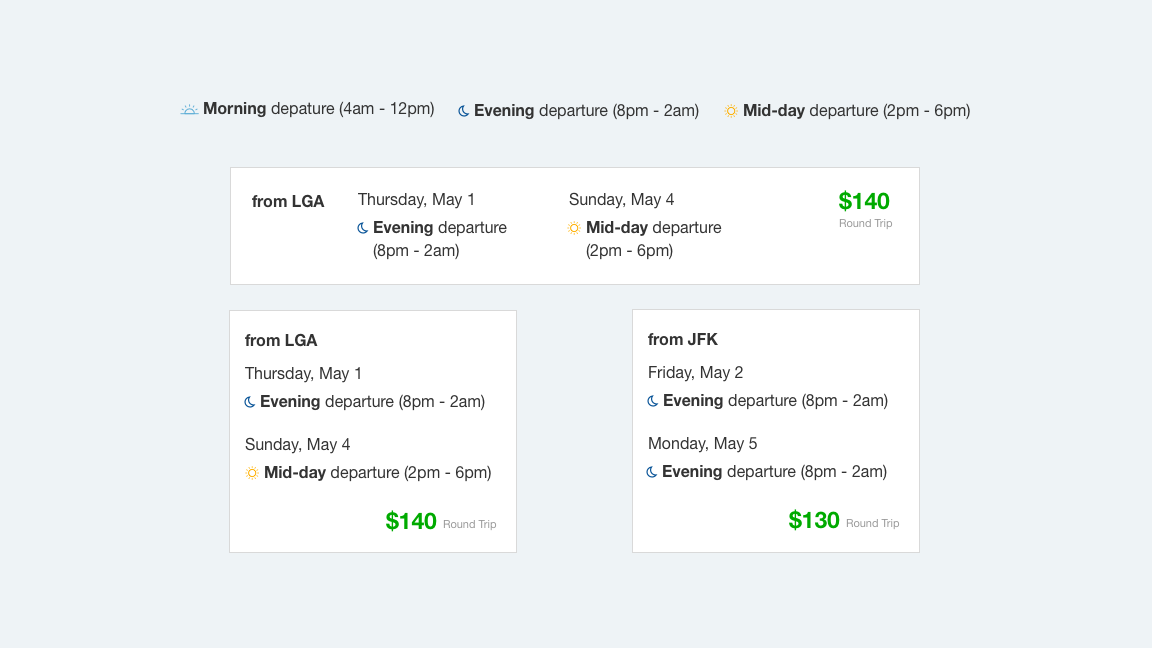 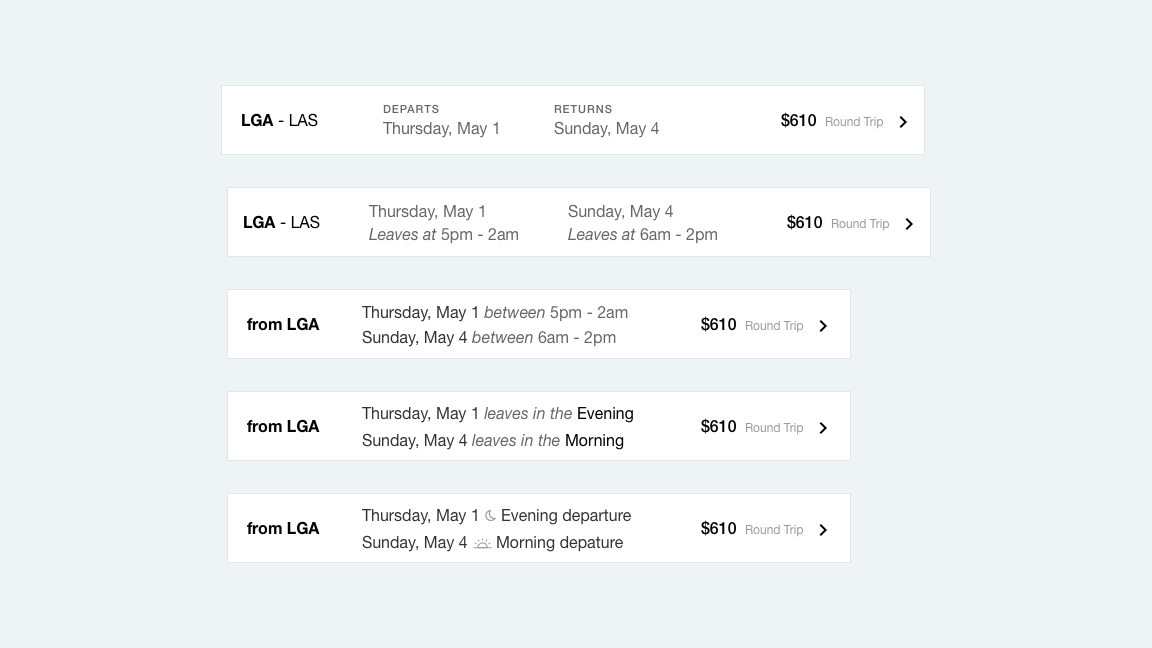 New time windows, meant more flights. So now we needed to find a way to not only curate them but also provide a way for users to select “alternative times” 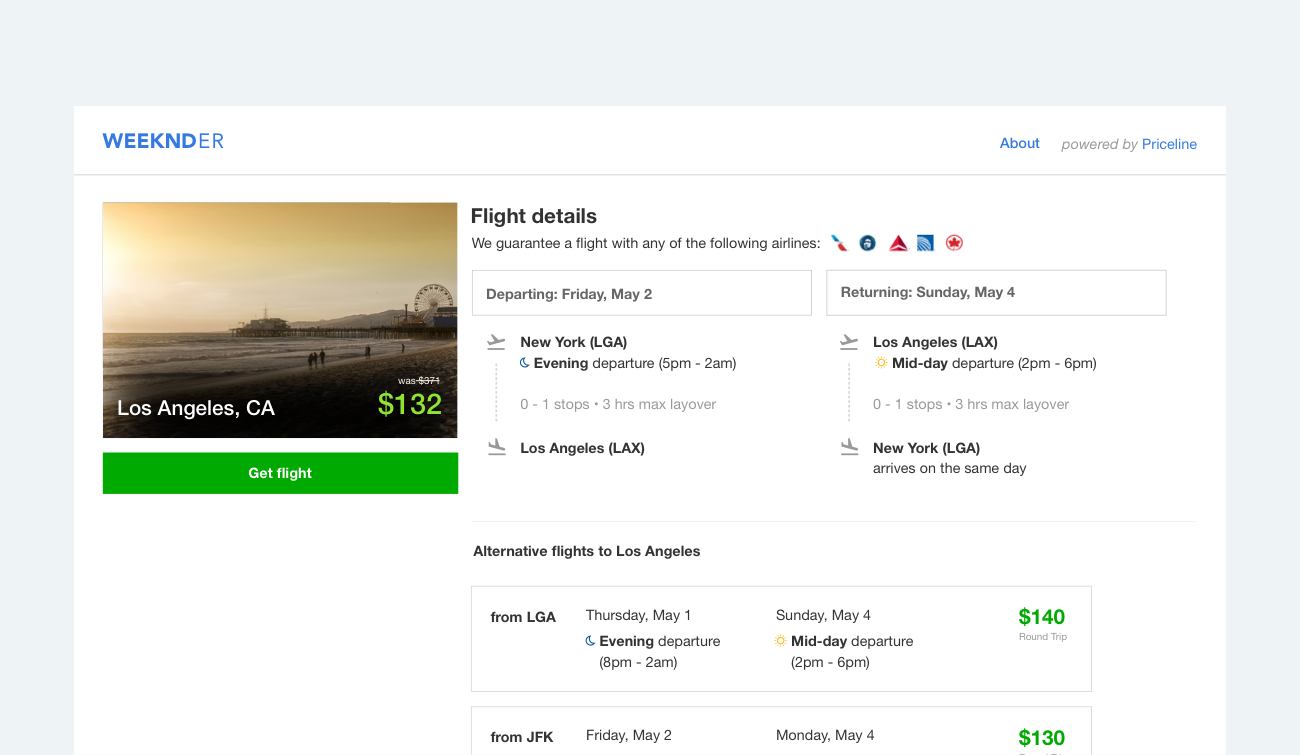 Expanding to different cities and weekends

As the app’s adoption grew, we decided to expand as well by adding more cities to our departure list. We added Chicago, SF, LA, Atlanta, Dallas, Washington D.C, Houston and Boston. All of the cities were selected by reviewing booking data.

At the time we only had Arial and Helvetica in the Priceline styleguide. Due to the experimental nature of this project, I was able to tinker with new fonts. I dabbled with Montserrat and Lato. Montserrat, many months later, would become Priceline’s official web font. 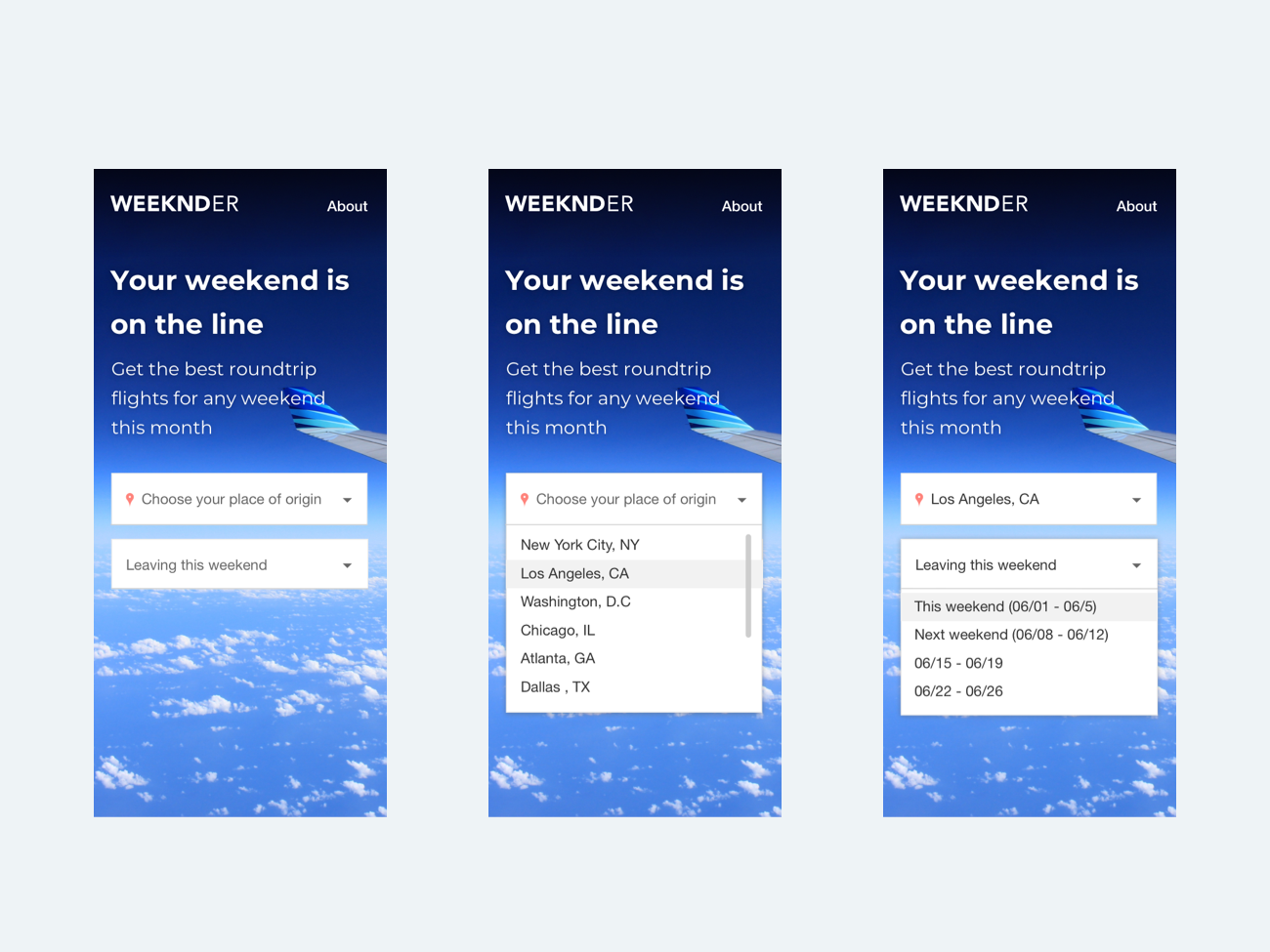 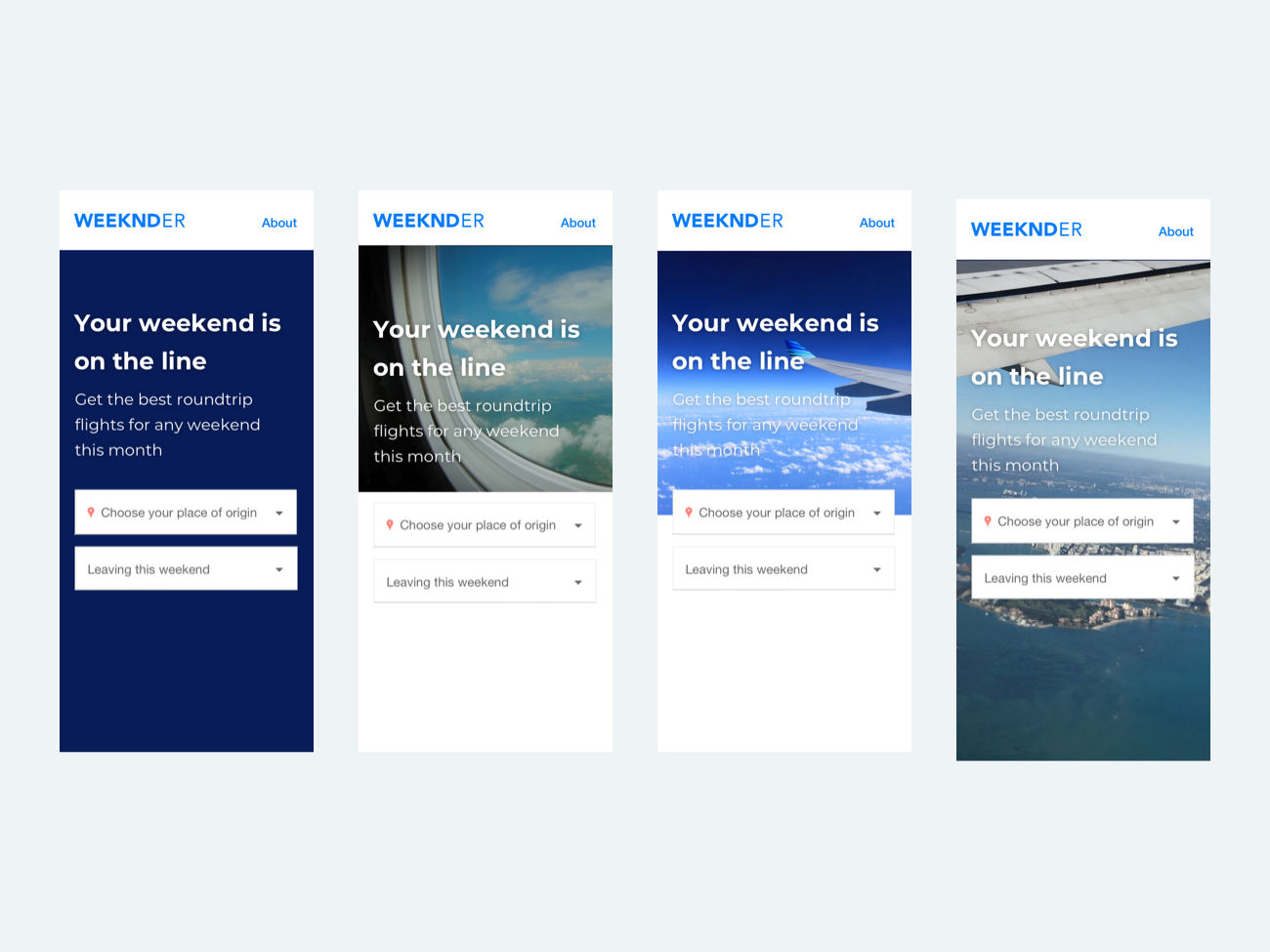 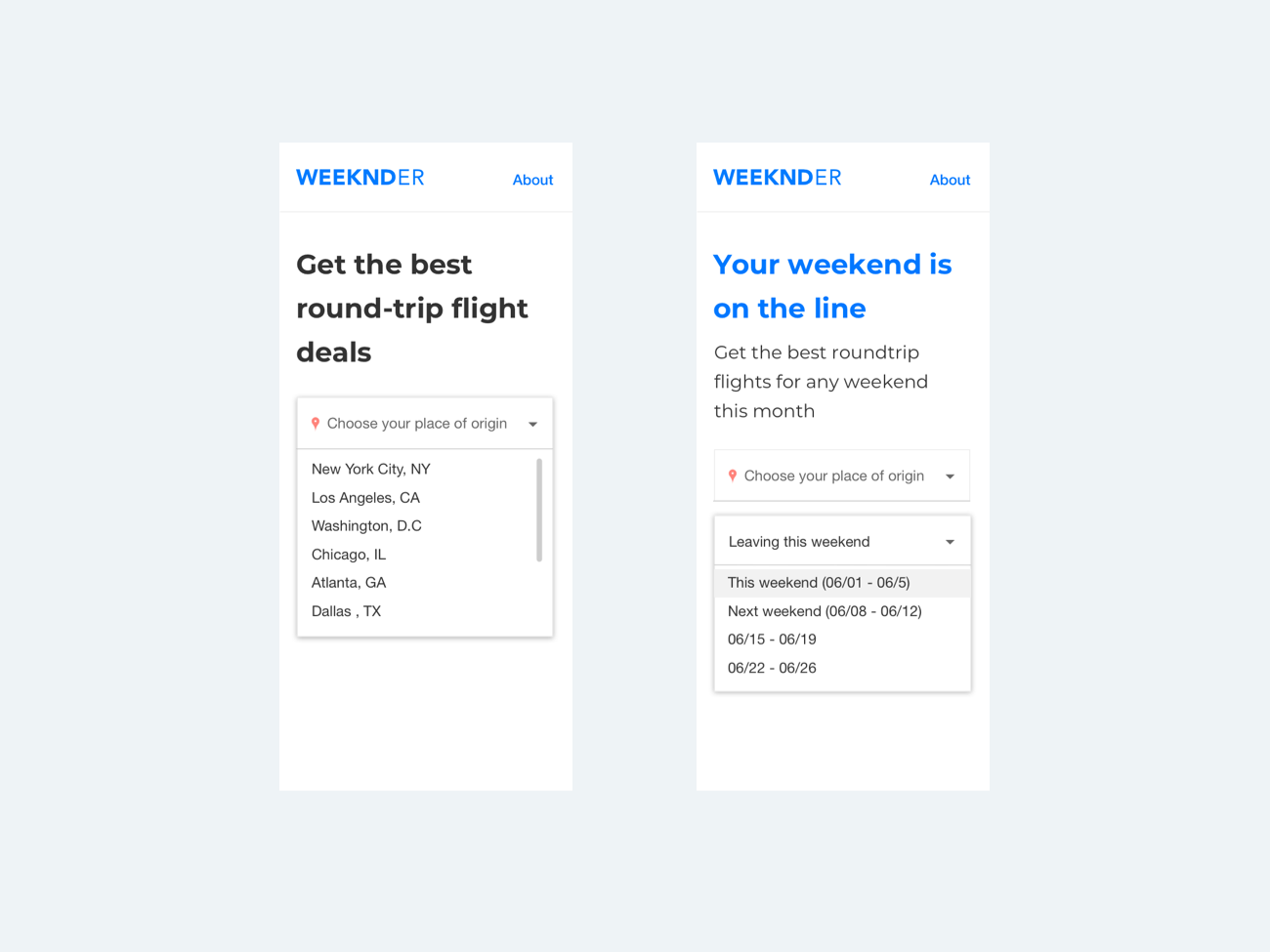 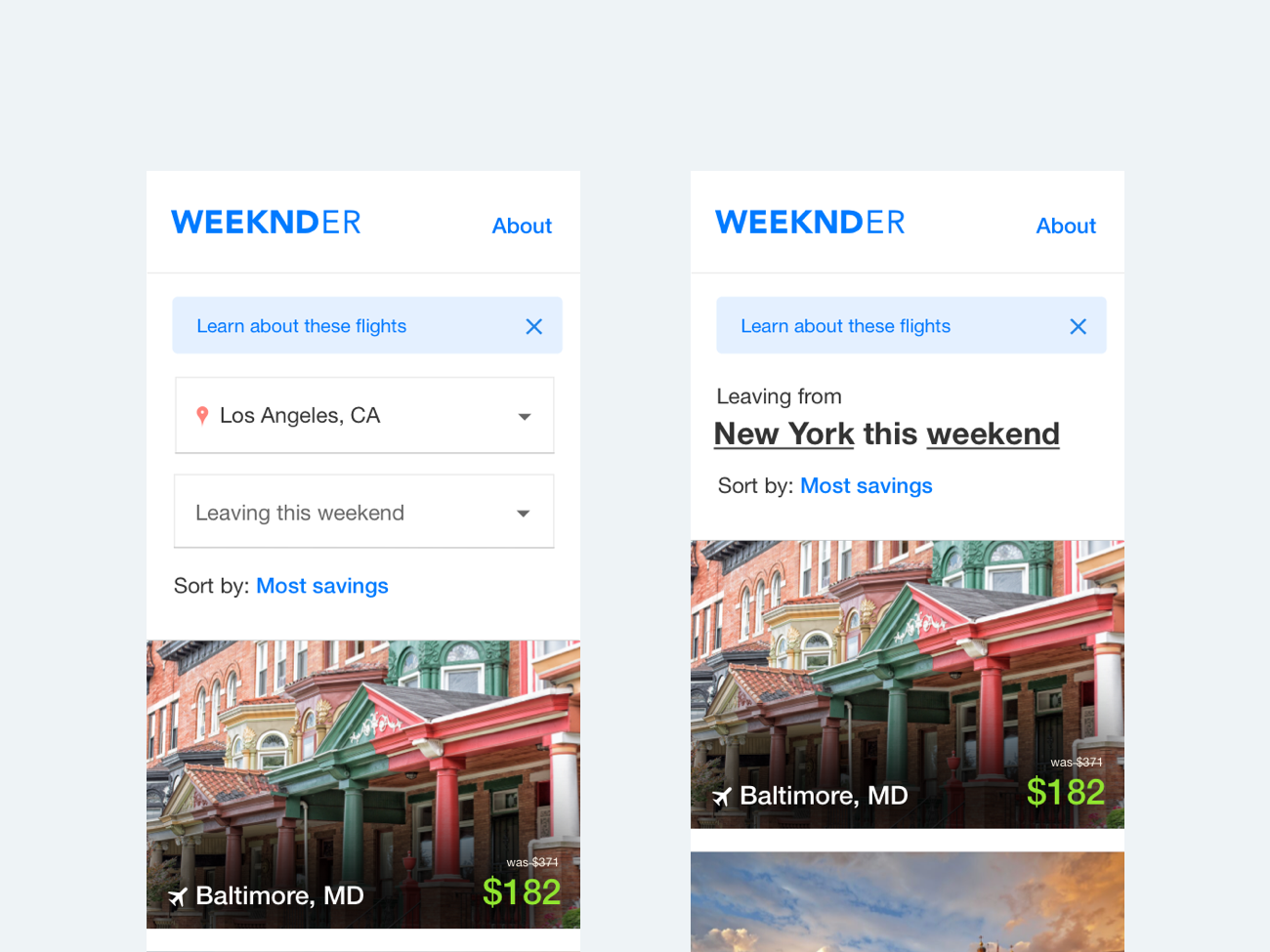 Weeknder was a sandbox of many ideas. It explored a new visual language, a new identity for Priceline. It pushed the envelope on what we were able to develop in a short period of time. I believe this benefitted the way we approached both design and development to some extent.

All insights and learnings from Weeknder were readapted and integrated on Express Deals for flights. Express Deals was a massive success and continues to be. 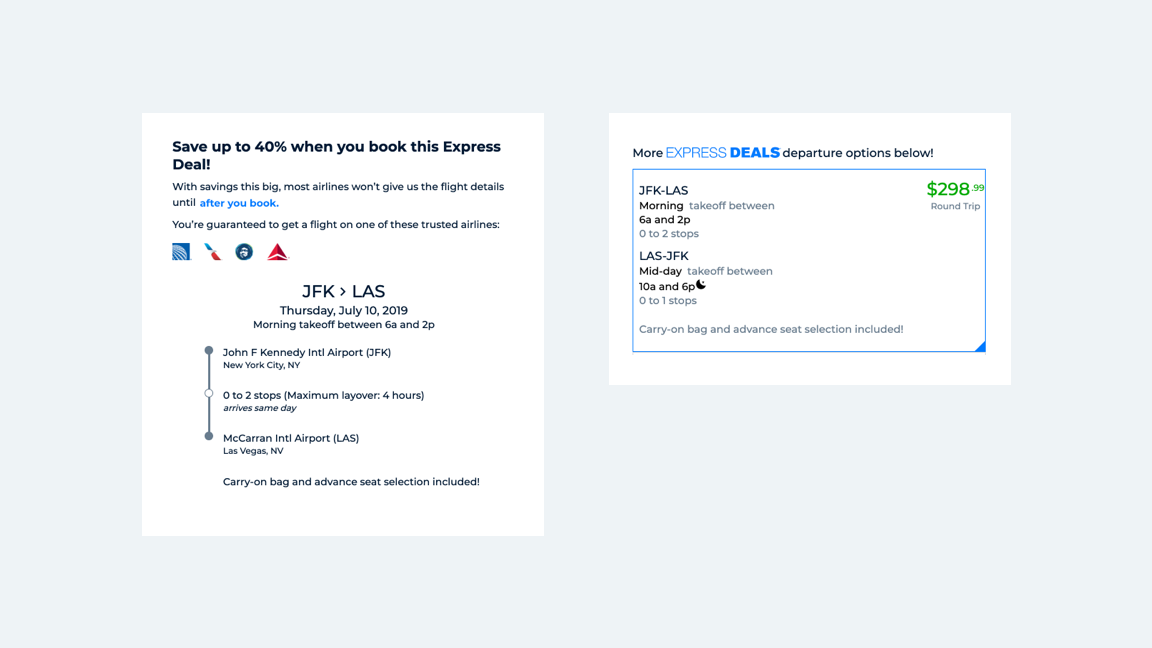